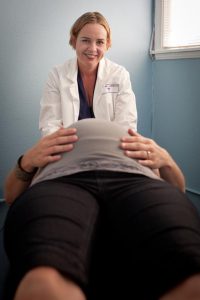 The Webster Technique is a specific chiropractic analysis and adjustment that reduces interference to the nerve system and balances maternal pelvic muscles and ligaments. This in turn reduces torsion in the uterus, a cause of intra-uterine constraint of the baby and allows for optimal fetal positioning in preparation for birth.

In-Utero Constraint happens when misalignments occurring in the pelvis may cause the uterus to twist and pull, tightening the muscles of the uterine wall. When this happens the baby can no longer move and may become stuck in the wrong or an unnatural position. This position may cause compression or twisting of the baby’s neck and spine.

While in this unnatural position, your baby’s spine is being forced into an unnatural position as well and this may have resulted in misalignments that can manifest as a variety of common childhood disorders such as colic, reflux, chronic ear infections, constipation, torticollis, etc.

In the 1970’s, chiropractor, Dr. Larry Webster, found a connection between a sacral subluxation (pelvic misalignment) and fetal malposition. The presence of this subluxation pattern may cause ligament tension which could result in undue uterine tension making it more difficult for the fetus to move into optimal position for birth. He discovered a simple way to determine the presence of, and provide chiropractic care for, this misalignment and resultant ligament tautness or in-utero constraint. The result of the procedure was that many babies were naturally able to assume the normal vertex (head down) position. 3In her article “The Webster Technique – A Chiropractic Analysis and Adjustment for Pregnant Women”, Dr. Jeanne Ohm defines intrauterine constraint (or in-utero constraint) as a condition where fetal movement is restricted, resulting in potential adverse effects to its development throughout pregnancy. Furthermore, limited movement and space in the uterus can lead to malpresentation in various forms: breech, transverse, posterior as well as ascynclitic presentations.”4 External maneuvers, like External Cephalic Version or others, are risky with only about 58% success. 6 Interestingly, one of the signs of a failed version is “a uterus tense to palpation”, 2 meaning that the uterus is tense or tight, which is exactly what the Webster Technique theoretically addresses. More midwives and obstetricians are recognizing the value of the Webster Technique as a non-invasive approach to malpresentations.

The Wellness Family Dr. Crystal Keeps You Informed A much safer option, the Webster Technique, is not known to convey any risk to the fetus or the mother because it is not an obstetrical maneuver. 3 It has nothing to do with the actual baby itself and everything to do with the mother’s pelvic function. By removing an existing subluxation the body begins to function properly allowing the fetus the opportunity to move more freely into the proper position.